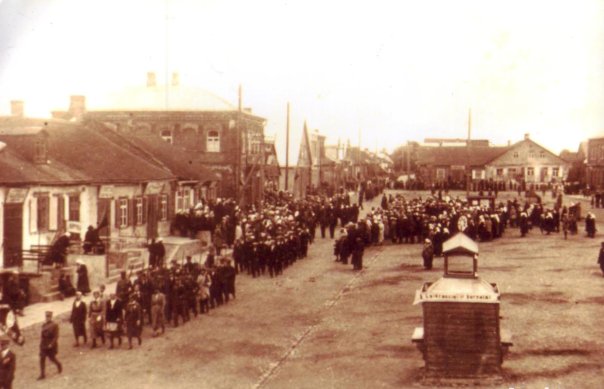 A small town of Anykščiai, surrounded by pine forests, is like a breath of fresh air to those, who both search for a way to hide from the dust of big cities and seek to get familiar with rich cultural history of small Lithuanian towns. Jewish community and its various activities were crucial to cultural and economic development of Anykščiai until the Second World War. Extant objects of Jewish historical heritage in the old Jewish quarter of Anykščiai might help to introduce a new side of this currently homogeneous Lithuanian town and its history.

Since the 19th century Anykščiai town was famous in Ukmergė district for its great weekly markets happening each Wednesday. Jewish community settled in Anykščiai at the end of the 17th century, and until the First World War and involuntary exiles related to it Jewish community was one of the biggest communities in town, majority of its members participated in trade or were craftsmen unlike local people from other ethnic or religious groups, who were mostly landowners. Due to this reason market square in Anykščiai was usually referred as Jewish market square, it was also surrounded exclusively by small Jewish shops. The vast majority of people from Anykščiai Jewish community have live in Žydų, Didžioji, Skiemonių, Kalamiesčio and  Įvažiavimo streets. One of the most popular Jewish shops in interwar Anykščiai was manufactory shop owned by two brothers – Mejer and Šepšel Rapports – its extant building stands to-this-day on  A. Baranausko sq. 6. Anykščiai Jews were not only traders – they were the most active innovators in the town – it is them, who organised the first and only bus in interwar Anykščiai, the only petrol station of that period belonged to a Jewish man as well. During the interwar period local Jewish community was ideologically divided and it is well-seen by their educational institutions: there were few cheders, yeshiva and three secular Jewish schools (both in Hebrew and in Yiddish), also two big separate libraries were establish – one for Yiddish and one for Hebrew literature. The ideological division was seen in religious matters as well – there were 6 Jewish prayer houses and one of them belonged to Hasidim. The colorful daily life of Anykščiai citizens during interwar period was unimaginable without theater troupe, orchestra, sports organizations  and photo atelier owned by photographer Icikas Melnikas. The most economically significant institutions for the Jews of that time was Jewish People`s Bank, which was established after the First World War in order to help those, whose were coming back home from exile, and later it proceeded as a major communal help organization. The extant building of this bank at Vilnius str. 5 reminds us today about the solidarity of local Jewish community.

Even though Jewish heritage in Anykščiai had been acknowledged and aimed to be preserved after Lithuania regained its independence in 1990, marks of destruction left on this heritage after the Second World War and following Soviet occupation are still apparent in the landscape of Anykščiai town – after the loss of Jewish community during the Holocaust the majority of buildings, which belonged to its members, were either reconstructed or demolished.

However, in the current Sinagogos str. (en. Synagogue str.) there is a memorial stone, reminding everyone, that until the fatal 1941 six Jewish prayer houses stood in the yard of this street. Only one actual synagogue building is extant at this street – it was re-purposed as a bakery during Soviet occupation. Nowadays the building stands unused, but it might be visited when its premises are being temporary used as a venue for exhibitions related to Jewish culture and history. There is one more extant building of the synagogue at the current Daukantas str. 7 (which until the Second World War was called Palestinian str.), this building is being used for the town’s prosecutor’s office. At the same street in 2012 there was a memory bench built for the famous artist, political abstractionism painter Rudolfas Baranikas (1920-1998), who was born and raised in Anykščiai, but later lived and created in New York. One more extant synagogue building in Anykščiai can be spotted on Šaltupis str., now it belongs to private enterprise. 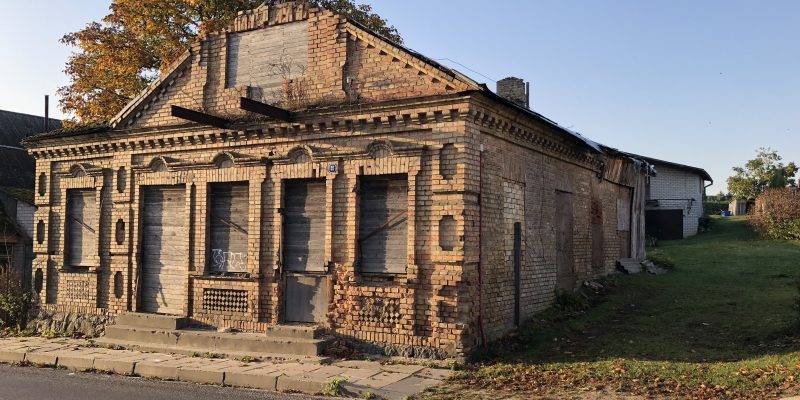 📚🎁 It is said that the house where the Yehud

👂🎵 Even today, among the old Litvaks, we can

“I am a sculptor from Lithuania.” These words